DEBORAH ON BEING THE TARGET OF A WITCH HUNT INVESTIGATION:

I signed up for the U.S. Navy in 1986. By January 1987 I went to bootcamp. In just about the final week of bootcamp myself and a few other women were pulled aside and questioned for being lesbians. That was my first introduction to Naval Investigative Services, NIS. So, I got past that, and I graduated bootcamp, but of course not with my class. They held me back and I never saw any of my friends from bootcamp, ever again. So I was sent to Airman Apprentice School, which was also in Orlando, Florida and I met another young woman who was also a lesbian. We became very good friends, which made my time in school much easier, knowing that there was someone like me.

We actually ended up going to our next station together which was in Mayport, Florida. From there, she introduced me around to some other women on base. Mostly people were very closeted. During my time there I started playing a lot of team sports, so I met a lot of other friends.

I remember one woman, I guess she was becoming disturbed because she wasn’t getting attention from a friend of mine, so she decided to go and talk to Naval Investigative Services, and gave them a list of names including every single player on our softball team. And at that time, everyone was pulled in for investigation.

I remember getting home to my apartment on Jacksonville Beach and waiting for my partner to come home from work, and it was well after dark. And when she did arrive, she didn’t want to speak to me, she was acting very strange and paranoid, so we left the apartment quietly and drove to a park and we still did not speak until we got outside of the cat and a ways from the car in case it was bugged. And then she proceeded to tell me that she had been held all day, since before lunch, that they put her in a dark room, they brought her out, they turned lights on her and started asking her a bunch of questions about us and our relationship and the way we were living. Which was very traumatic for her. When we got back to the apartment that night, we started purging everything: videotapes, letter, cards, pictures, to where we started burning stuff in the stainless steel kitchen sink. I think the next day Naval Investigative Services came to the house and did a search. Everywhere. And then of course I got pulled in and questioned, but nothing like what she had been through. And since I had already been through a dust of questioning during bootcamp, I already knew what to expect. Needless to say, after that, our relationship whet down hill very quickly after that. It was never the same…

If you thought people were closeted back then, after all this, we didn’t even look at each other, talk to each other. I don’t think people even participated in sports anymore. We were just horrified.

So I guess, then the girls were no longer hanging out in twos or fours even, now we had to bring a beard along. And lucky for us, we a friend, his name was Pappasito. He started hanging out with us and going everywhere with us. He was straight, but he knew about us. He was very cool. And the rest of my time there, at Naval Air Facility Mayport, was pretty quiet after that.

I knew I had to start hanging out with more guys, at one point I even had a boyfriend. I was in a program where they moved me around to different jobs on the base. Like an apprenticeship program where you just learn about all the different jobs. So when I ended up at this one job that was Air Craft Support Equipment, that’s when I really made sure that I really started hanging out with the guys. Because they were all a bunch of mechanics, you know. So basically, making a beard and being what it was that the military wanted to see.

It’s hard though because you start hanging out with the men, and things happen and at one point I did get raped. I never reported it. And I’m kind of in the process right now to see if I want to talk to someone about it—what do they call it…military sexual trauma. So when you’re asked me, do I have dreams? No, I don’t have dreams. I have nightmares.

What really upsets me is to see that our tax dollars paid for all these witch hunts. Because of the people who were taken in for questioning, all of us were very high achievers, hardworkers, never caused any problems. We all came in and did our job better, because always when you’re LGBT and in the military, you have to prove that you are better than anybody else; whether it’s just limitations you put on yourself, or that’s the perception. In my experience I always did more, myself. I still do. It’s just how I am.

After that I got selected to go to photographers school in Pensacola. When I finished, they sent me to my first duty station in Key West from 1989-92. And in Key West, anything goes. So I lived very out and in the open and it was the total opposite from before. It was the best time that I ever had in the military. It was great because I could do my job. People weren’t giving me a hard time because of who I am, who I’m sleeping with.   Key West is very gay, it was very affirming.

After my time in Key West I finished active duty, which was five years total and I moved back to Dallas because my dad was dying of cancer. He had just been diagnosed in March of ‘92 and by October of ‘92 he had passed away.   He was 56 years old. My dad of course was never very affirming of my brother and I being gay because my mother and my dad divorced when I was 7 years old because my mother is gay. She’s also a veteran.

So then I was in Dallas and I signed up for the Reserves. In the Reserves you put the uniform on for one weekend a month and two weeks in the summer and I did that until 9/11. When 9/11 happened, I got called back to active duty and that’s when I ended up in South Florida to act as an intelligence analyst supporting the United Stated Southern Command. My first couple of months when I was here, I pretty much kept to myself. My supervisor noticed that I was down and depressed. I was very closeted, and very homesick. I didn’t have any support here. So he helped me get a car. I immediately started driving to Fort Lauderdale looking for community, which is what I found. I ended up going to church at Sunshine Cathedral and I met a woman that I ended up being in a relationship with. When I finished my time here supporting Operations Enduring Freedom and Iraqi Freedom I wasn’t quite ready to go back to Texas because my dad had passed and I was with this woman. So I decided to stay here in Florida.

I moved out of the hotel I had been living in for a year and a half, moved in with her, and started looking for regular work.   I was still in the reserves until I retired in 2008. I served a total of 20 years.

Basically I learned to show the people that I interacted with in the military what they expected to see.  One event that really hurt me was a conversation I had with my step-mother where she questioned:

how can you be in the military and be gay? And I just said to her, well mom, I don’t think it’s right that if you are gay you’re not allowed to serve in the military, when all you want to do is serve your country.  It’s just not fair.  So I do what I have to do so that I am allowed to serve.  End of conversation, she never brought it up again.

So, in a way, I learned how to lead a double life.  I had to overcome what my family thought about me, that I was a liar, because I wanted to serve.  I think it’s amazing to see how things have changed.  Folks can get their partners dependent ID cards, so it’s wonderful to see the things that are changing.  So, would I change anything.  No.  It’s just the way that life is supposed to be. 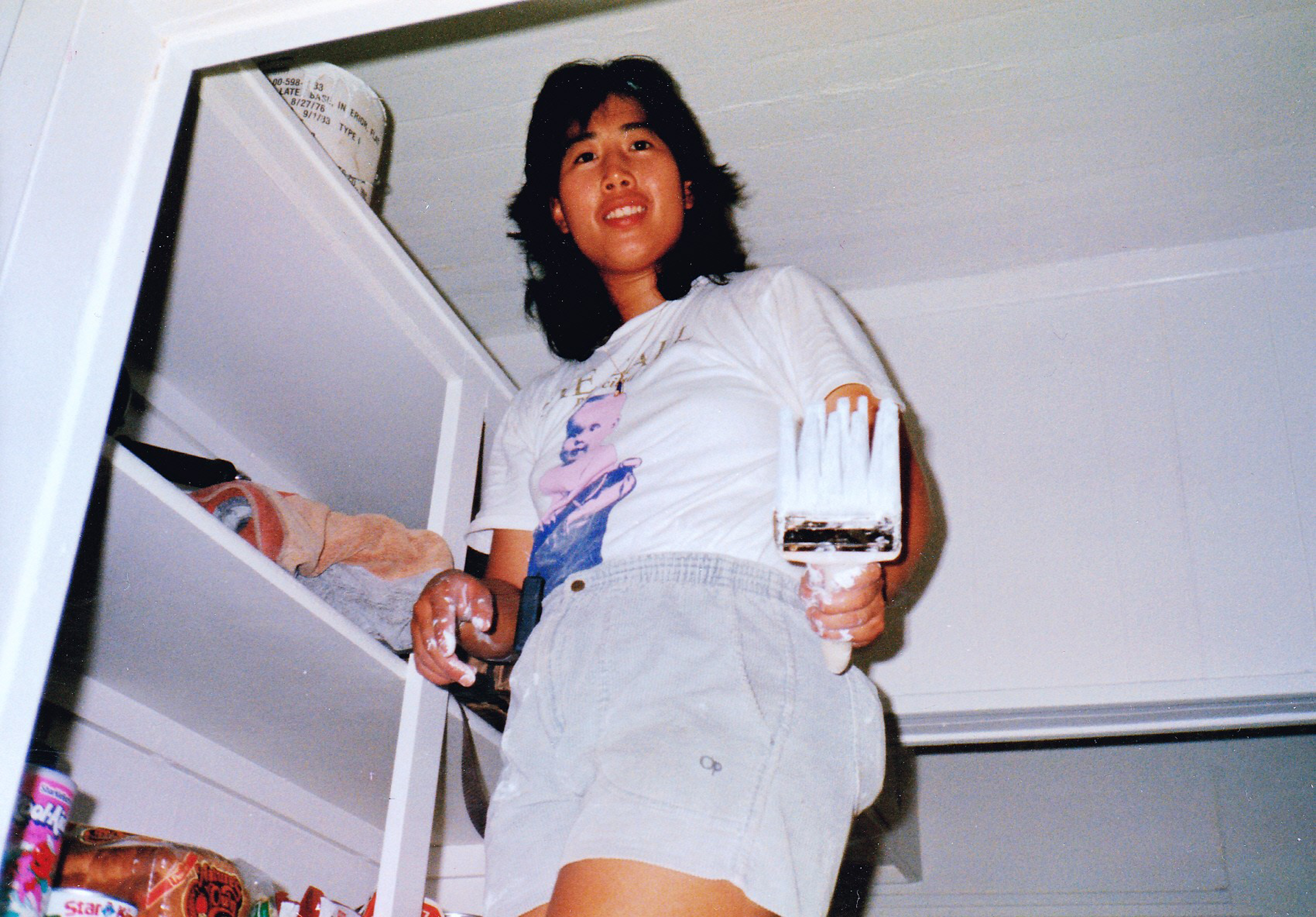 I’ll never forget the night that the guy took advantage of me and I said no, no, no and he just proceeded doing what he was doing.

When I first got to Florida right after 9/11 my hotel room was right across the street from the airport. I had to tell the staff that I had to move rooms to the other side of the hotel. All night long hearing the planes I would replay the scenes of people jumping off the towers. Even though I wasn’t there, it was like somehow I had captured that into my mind.

Not really dreams, nightmares. I’m a very sensitive, compassionate person. Probably too sensitive for the world.