JANINE ON MOVING TO HER FIRST POST IN LOUISIANA WITH HER THEN-PARTNER, FRESH POST THE DADT REPEAL:

When I was in my senior year of high school I was realizing I was gay and I had thought that you can’t tell anybody, nobody that I know can ever know about this. So it was in my thoughts that I had to go and start a new life without any of my people knowing about it, so that was what initially made me want to go to the military. Then I didn’t go away, I ended up coming out and everything was okay. But when I was in school to be a surgical tech and I made a comment one day that it would be kind of cool to be in the Air Force my teacher looked at me and said, well, what are you doing here? They will pay you to go to school.   So a couple of weeks later I enlisted.

Don’t Ask, Don’t Tell wasn’t in effect when I initially thought about enlisting and it didn’t have anything to do with my timing of going or not.   But when I did decide to go, DADT was so fresh that on the handwritten application they had marked out “are you a homosexual? ” with a sharpie. So they couldn’t ask it anymore but it was still on the application, they just marked it out it was so fresh.

By the time I enlisted I was out to pretty much everybody, so it was really difficult to go back into the closet. Once in the military I definitely didn’t talk about it. My first name is Julie, but I go by my middle name, Janine. When I was in the military, I had all of the military people call me Julie and only my true friends call me Janine. That way when someone spoke my name, I knew who I had to be. If someone called me Janine, I knew I could be myself, but if somebody called me Julie I knew I had to pretend to be straight.  In basic training maybe one or two people knew and then maybe in clinicals, one or two people knew, but once I got to my station which was in Screw Point Louisiana, which was a whole reason to be closeted by itself, I was pretty quiet about it. But I had a partner who was from here who said when you get where you’re going, I’m going to come and be with you. At the time I thought well, you know, sure, but she actually did show up and we ended up living together. I’m thinking I’m in the military and it’s not okay and they say they didn’t do witch hunts but they really did…

So we came up with this story that my cousin came here because she got a job and that’s what we were…cousins, which brought on its own set of jokes. It’s only so long that you can call someone you’re having a relationship with your cousin before what you’re doing seems really wrong! 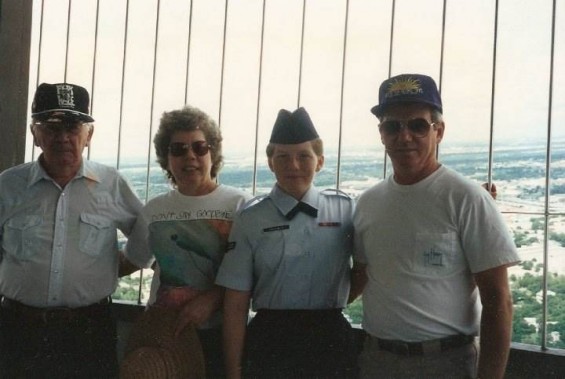 When I first got to my duty station we were in an auditorium and one of the guys that I worked with sat next to me and said so you don’t live on base? Well you’re enlisted, that’s not typical unless you’re married. I said yeah, I know but my cousin, she just moved here and needed an apartment. He said Oh really, how long has your cousin been your cousin? I said, oh about two years. So that was the first person I knew in the military who was gay…

Up until I was 10 or 11 I had this nightmare where there were two or three men coming into the house to steal me. I was terrified, trying to find the smallest place to hide.

As a teenager I dream of showing up with no close on, trying to hide but unable.