TERESA ON THE EQUATION OF HIDING, FEAR AND PATRIOTISM:

My biological father was in the air force, I thought if he can do it, why can’t I? At the time the military was pushing good for education, good for travel and serve your country. At that time it was peace-time, so you could go and get your education, you could travel, and of course you meet tons of other people. So I thought let’s do it. I enrolled in what was called the delayed enlistment program so I actually enlisted before I finished high school.  You go and have the summer on your own and then it was actually a week before my 18th birthday that I was on a plane to Texas. 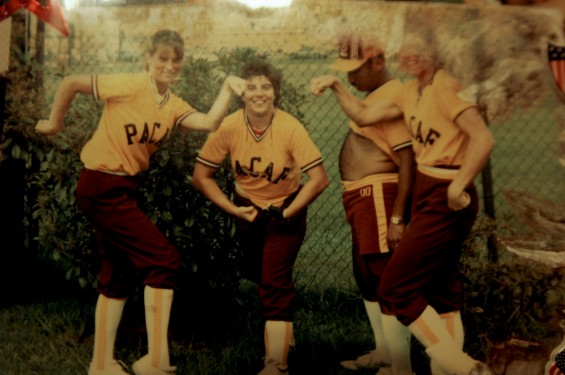 They ask you if you’re gay or straight when you go into the military and at the time I thought I was straight, because at 18, in high school, I wanted the kids and the picket fence, the whole nine yards, that was what everyone wanted. Or so I thought. Then, gradually as I was coming into myself, being on different bases, sports inclined, I joined the softball team with the women. And on some sort of athletic team, that’s where you’ll see most of the gays or lesbians. They would flock to that. All the sudden you look around and you go ‘wow, she’s uh…” you start having all these feelings like, why do I think she’s cute?  And you’re wondering, uh oh, what’s going on here? At the time, as I said, I was 18 years old, you’re in this growing phase and then you have this thought: I’m not really sure if I play for that side of the team. So it’s like ‘Wow! …That’s kind of weird…’

In the military at that time, of course it was taboo. I wasn’t witness to it but from what I heard they had witchhunts, they were looking for the gay bars, which back then were the same, girl bar/ boy bar. And from what I understand you were guilty by association, even if you were there and you were straight. If you were gay, you just needed to not be and you just had to take a lot of precautions. While I was in the military I went to a gay ceremony, but it was not legal anywhere- but it was a committal ceremony. It was very hush-hush, you had to do everything away from everybody. You had to talk in codes, we called each other ‘family’ and nobody knew that. Like when the rainbow came out, the first rainbow sticker, nobody knew what that meant. But if you saw it on a car, you would know, because you’re gay. No straight people knew what that meant, but when you’re gay you know that there’s somebody like me. Kind of crazy, you know?

I’m Italian Catholic so being gay is no- no, actually it’s a double no-no. You fight it. You try and figure maybe it’s a phase because, you know, when you’re so far away from home, and it’s your first time…. Then you start having these feelings and you don’t know what to do with them. I think I had kind of an epiphany, it was after I had been in for three years or so when I started looking at women not just for friendship, but as a partner, and then you start looking at men as friends. It was tough and when I finally realized it because you’re in the military, in a profession that you can’t be gay, and if you are it’s a dishonorable discharge. It’s too much, so you try and walk that fine line, you have the pretend boyfriends.

I was actually engaged to be married twice. He had orders to go overseas in Germany as I was finding out who I am.  I finally told him: I can’t marry you.  But I couldn’t tell him why. I just told him “I can’t marry you, because something’s not right.”  You know something’s not right, but you can’t tell the guy why because you don’t want to break his heart. And then another guy, he was a great guy, I really loved him. Love, love, love, love, loved him- but I just couldn’t go through with it.

It’s a fight inside of you. You know you’re gay just as pure as the day is long, but you just can’t; you just don’t know what to do at that point because it was just a bad time: If you had too much fun with a girl, all eyes were on you.

Then you join the football teams, the basketball teams, whatever, and that’s where you made friends, where there are a lot of people like you, and you start to realize what’s really going on. 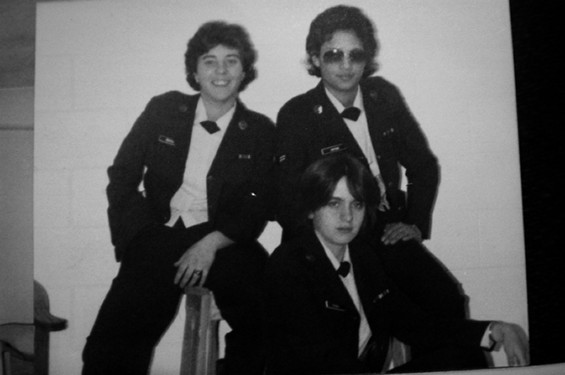 It’s hard because once you figure it out, then you have to tell your family and that’s bad too. I told them right after I came back from Okinawa, Japan. A lot of my family members were like, well, it’s about time. I went to my uncle- and again, being from an Italian family, I was expected to be shunned, to have the bible thrown at me- and when I told him and he goes “Love who you love. I don’t care, you’re my blood, you love who you love.” And as a sidebar, he says “just make sure it’s a nice Italian girl.”